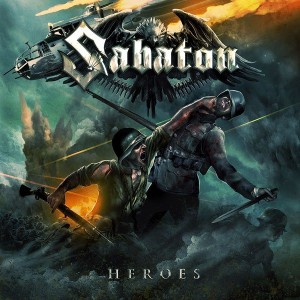 A number of great things come from Sweden, Sabaton and their new album “Heroes” for example along with IKEA, but considering we all know what IKEA is let’s get back to Sabaton.
When I picked up this album the first thing I noticed was the sticker on the front boldly declaring it the best Sabaton album ever, which gave me some pretty high expectations. This is the first album that was recorded with the new lineup and I am pleased to say it holds up perfectly.

This is the 7th studio album by Sabaton and as with previous albums (excluding Metalizer) is based off historic battles and conflict. During the production of Coat of Arms, Sabaton found a lot of smaller stories that they weren’t able to make fit. This time around though, they dedicated the album to the smaller efforts that are usually unnoticed in the history books or would be passed on as foot notes. In fact with so many different stories in this album, Sabaton has included in the booklet a small but detailed description of what the song is about, hitting all the key points so you understand the incredible stories behind the songs.

No time is wasted in throwing you into the thick of the album and opens fire with pounding drums, solid guitars and a powerful vocal performance. But with such a strong front line are they able to keep up the momentum and follow through? I’m pleased to say yes they are. In fact they build upon it with each song.

Each song has a weight to it that become apparent as you listen to the story being told. It’s rather difficult to stop yourself from imagining a massive, chaotic battle against all odds or something smaller such as a single man going beyond the call of duty. That is why this is a good album, it’s the audio equivalent of a movie and paces its self well so you don’t get bored.

It’s difficult to pick out any individual songs to demonstrate this with as they all hit the nail on the head perfectly, however Resist and Bite along with Hearts of Iron are worth mentioning.

Resist and bite was about 40 Belgian riflemen against a much larger German force and due to a communication error they never retreated, rather they fought the German force so viscously it they looked like a much larger force. You can feel from the very start of the song, this is going to be massive, desperate and powerful. If there is any song that shows what the album has to offer it’s this. Pounding drums and powerful vocals set this apart from anything else with guitars in the chorus rounding it all off, I suggest cranking it up as far as possible for the best experience.

On the other hand Hearts of Iron comes in as the last song in the album about the end of the war from the German army’s perspective in Berlin, where they fought bravely to keep civilians safe as they fled the city. The tone and feel of this song just ends the album perfectly as you can feel the desperate situation while at the same time feeling inspired by a simpler, nobler cause as you know it’s over, all is lost, but you still try to save as many innocents as possible before the inevitable defeat.

If you listen to Coat of Arms, Art of War or any other album by Sabaton, you can feel a small empty space where the keyboard used to be as the songs sound like they were created with a keyboard in mind, Resist and Bite is a decent example of this. However I find that it doesn’t suffer from it, rather it feels more of a homage to Metalizer which is basically a re-release/ re mastering of their intended first album. In that context or even on its own it still stands strong although a keyboard, such as those in the previous albums, would make this album nothing short of perfect.

All in all, the sticker on the front doesn’t lie. Heroes is definitely worth picking up and having a listen to with brilliant vocals and perfectly executed guitars and drums you are in for a treat. Just make sure that you turn the volume up to 11 to fully appreciate it.

Writer and editor for Metal Warriors. Doubles as photographer with an interest in technology and video games.

Previous: Empires of Eden – Channeling the Infinite – Review
Next: SKULL FIST – HEAD OF THE PACK – REVIEW