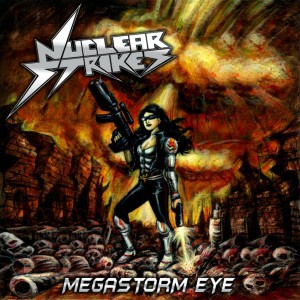 If anyone were to ask me my stance on censorship I’d sit them down, get a piece of paper and a pen write down the offending word on said paper then proceed to rip it up into a million tiny shreds, then bundle them all together again and set fire to the bundle.

But to be honest we get it easy herein the land down under compared to other countries, take Malaysia for example in just metal alone, back in ’06 Mayhem was banned from playing a concert in the country as part of a world tour due to the slogan “Bringing hell to your doorstep” which apparently endorsed   “satanic worship and drug use”.

Worse still is the downright oppression that metal acts and fans in Malaysia have had to put up with ranging from arrests, unwarranted investigations to being deemed satanic (no offense to actual Satanists) and radio play of metal being banned from radio in 2001, reasoning that there’s a metal cult that is a social and even political problem.

This is one of many reasons why I respect Nuclear Strikes, a female fronted quintet with some of the most bitching nicknames I’ve ever been privy to that stayed true to themselves and with inspirations ranging from Warlock, Iron Maiden, Judas Priest, Manowar, Helloween and many other timeless acts as well as a passion to rock these guys released their first EP Megastorm Eyes back in 2011.

What an EP it is! A great debut with a hypnotic like effect thanks to the mesmeric pacing of every song, starting off with the electric Megastorm Eye sating the power metal craving that never seems to die down within my being that transitions nicely to a more subdued track in Last Savior with a slower, more melodic pace which carries on through Memoir of a Friend, Red Soldier and Terminal Danger, and ends on Memori Hidup, an excellent (though foreign)power ballad, showcasing further the bands collective talent and wide range.
What keeps striking me about these songs is they have a Doro like vibe but also sound like its own thing which is many points in Nuclear Strikes’ favor.

Every song is great to listen to and I long for early 2014 when the bands next album drops if this is any indication of what I’ll be hearing more of.