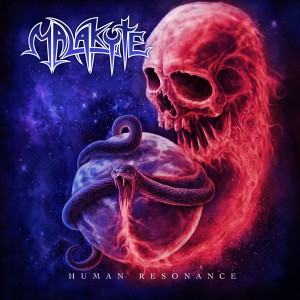 It just so happens that I was at the office door when the postman arrived with a package from the band Malakyte from Brisbane, Australia. It’s a band that I have been hearing a lot about so my expectations were high right from the very start and I could not help myself but decide to open the package and review this one myself.

The album starts with an impressive mellow intro that really sets the scene for what is to follow.

As the heaviness of the album kicks in, the immediate impression I got was being surprised by the fact that the production was definitely not big in the ‘modern’ sense. I paused my thoughts for a moment and It took me several seconds to sink it in and comprehend what was going on before It became so evidently clear that these young thrashers are doing this with deliberate intentions to deliver a genuine classic Thrash sound and they are doing it extremely well.

I have become too use to bands attempting to capture the spirit of a classic thrash sound, but masking It with a modern production so as not to get criticised of being ‘old hat’. This is where a lot of the bands lost the spirit of what Thrash Metal was suppose to be all about. This band has thrown that ingredient out the window and gone for a pure classic Thrash Metal sound. Love it or leave it, Malakyte leave no compromise with ‘Human Resonance’ and it’s refreshing to see the newer generation of bands rejuvenating the classic era of Metal and doing it so well.

This leaves me wondering… In today’s modern world, how does a band manage to replicate a classic 80’s Thrash Metal sound without it sounding like a bad production? Well, Malakyte have the answer with Human Resonance and they’re sharing it with us on this little gem. I have to applaud this effort. This is a furious blend of thrashing guitar attacks with hard hitting bass lines supported by very solid drumming and a strong voice that will get everyone off their computers and thrashing it out and moshing in front of their speakers the good old way.

This album grabbed my attention from the very start and before I even finished listening to the album, I was thinking about just how much I’d like to see these boys thrashing it out live on stage.

Malakyte look and sound like a re-incarnation of a combination of classic Thrash Metal bands from the Bay Area, New York and Germany all rolled into one and then spiced up with some Aussie Thrash. Try imagine Overkill, Nuclear Assault, Destruction, Hobbs Angel Of Death and early Mortal Sin all rolled into one.

The album is solid and well rounded off track by track. After a perfect balance of several thrashing numbers, the tempo changes with a well played Instrumental in ‘Skeksis’, just long enough to give you enough time to head to the fridge to crack open a bottle of beer or mix yourself a quick JD and Cola before it kicks in with another assault with the impressive ‘Fall To Khaos’.

Constructive criticism for this band? Nothing apart from my opinion that they should number the tracks on the back of their CD tray card.

As long as this band stays together and keeps producing what they’ve done with this album, they will no doubt become a global force in Thrash Metal. Message to the band: Give yourselves a quick pat on the back for this cracker of an album and get back to work on the next release because you have a winning formula. Message for all the Thrashers: Grab a pen and paper, jot down the name Malakyte so you don’t forget to buy their album ‘Human Resonance’. Then once you get your ears thrashed by Malakyte, you won’t forget the name.