Empires of Eden
Channeling the Infinite 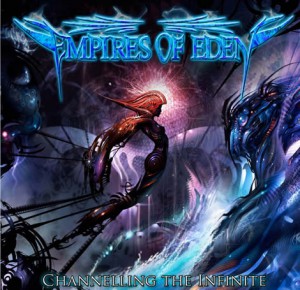 Hailing from Sydney Australia, Empires of Eden is the baby of Stu Marshall (Dungeon, Pandivision) an ambitious collaboration project which has already been bought to fruition by the projects previous two albums: Songs of War and Vengeance and Reborn in Fire.

Stu Marshall leads the all-star charge with amazing technical guitar and bass work on all the tracks as well as providing the astounding orchestral arrangements used in a few songs while Jasix Prowlingwolf provides the necessary thunder in his drum work.
The stage is set for amazing talents the likes of Rob Rock (Impellitteri, Avantasia), Danny Cecati (Eyefear, ex-Pegasus) and metal legend; Udo Dirkschneider(Accept, U.D.O) just to name a few.

Every guest on the album puts a great effort into their respective tracks but what makes the Empires project unique is that Stu sets out to tailor the instruments to each individual guest vocalists style and preferred range, quoting him from the Empires of Eden website “They are completely at liberty to write any lyrics they want, and they pen the vocal melodies themselves, too.”
What this does is make every track feel utterly unique, from the balls to the wall crushing vocals of Udo on ‘Hammer Down’, Sean Peck delivering the outright light speed vocals on ‘Channeling the Infinite’ and the soaring vocals of Rob Rock on the opening track ‘Cry Out’.

The entire album is one big melodic power metal trip with each and every track feeling fresh thanks to the guest vocalist on each of the 11 main tracks and as an added bonus, 2 bonus tracks one of which is a superb all-star version of ‘Hammer Down’.

Personally I can’t nail down a few standout tracks because the fact is that every track is damn good and worth a few listens to truly appreciate, though it is liable I’ll be screaming out “HAMMER DOWN” the next few weeks, it’s a great album to listen to and I for one look forward to the next album (which is set to rock our brains out next year)

I’m channelling the infinite chasm known as my head and conjuring up a 13/13 for this one, definitely worth a listen to any person who appreciates metal and a definite listen to those who like a lil’ more power!